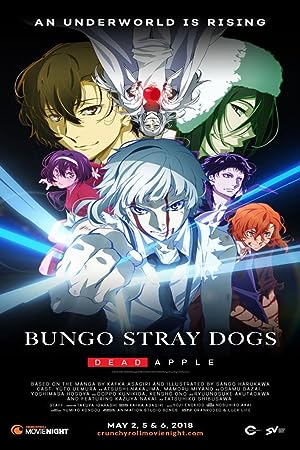 What is Bungo Stray Dogs: Dead Apple about?

Rivalry between groups of criminals and detectives, who use their supernatural abilities to wage war for control of Yokohama, results in the 88-day long "Dragon's Head Dispute". Osamu Dazai and his Port Mafia ally, Chuya Nakahara, manage to escape death. Osamu bids farewell to his boss Oagi Mori and is only seen in his new place two years later. Meanwhile Atsushi Nakajima and Kyoka Izumi join the Armed Detective Agency, living boisterous yet peaceful days. But something strange is happening as Ability users around the world are successively committing suicide.

Which streaming providers can you watch Bungo Stray Dogs: Dead Apple on