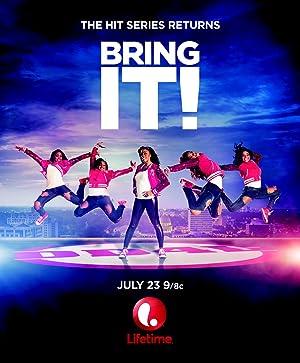 How to Watch Bring It! Online in Australia

What is Bring It! about?

Bring It! is a new dance reality show which focuses on the dance team, The Dancing Dolls, from Mississippi. They are a competition dance team, and their style is, "Hip-Hop Majorettes." This show is produced by Lifetime, and is lively, and the girls are fun to watch. Coach D is a strong woman, with a no-nonsense personality, and drives the girls under her to be the best they can be. Still, she has a human side, and she does care about the girls, and tries to be supportive of them (something we don't see too often in another, well-known dance reality show). Further, the "drama" of the dance moms is surprisingly low-key when compared to another reality dance show, also produced by Lifetime. Give this show a chance. It will surprise you, as the dancing is different from what you are likely used to watching.

Where to watch Bring It!

Which streaming providers can you watch Bring It! on

Here is the comprehensive list of streaming providers that will show Bring It! in Australia. If Bring It! will appear with other providers further down the line, this table will be updated.

The cast of Bring It!

Bring It! is a great Drama movie, we’ve selected several other movie options that we think you would like to stream if you have watched Bring It!

Bring It! is a great drama show, we’ve selected several other show options that we think you would like to stream if you have watched Bring It!