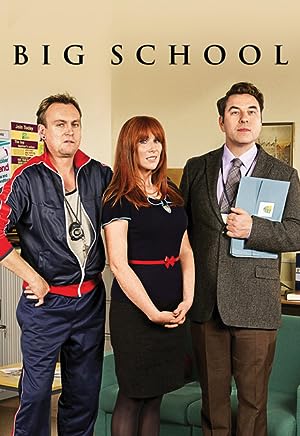 How to Watch Big School Online in Australia

What is Big School about?

The series follows Keith Church (David Walliams), a socially naive chemistry teacher at the fictional Greybridge Secondary School, near Watford, North London, who falls for new French teacher Sarah Postern (Catherine Tate), who believes herself to be an inspirational teacher, in tune with youth culture and a beautiful woman. However she is also getting attention from arrogant and rude sports teacher Trevor Gunn (Philip Glenister). Other staff members include Ms Baron (Frances de la Tour) as the alcoholic 'no nonsense' headteacher, Mr Martin (Daniel Rigby), a music teacher with ambitions to be a singer-songwriter, Mr Barber (Steve Speirs), a geography teacher who is having a nervous breakdown and is employed as a caretaker in the second series and Mr Hubble (James Greene), the elderly and confused head of science. The pupils at the school are portrayed as being mainly interested in social networking, texting and partying and as being bored by the attempts of Mr Church and Miss Postern to engage with them. The most prominent of them in the first series is a streetwise pupil called Manyou, played by Joivan Wade, who is asked for advice on how to succeed with women by Mr Church.

Where to watch Big School

Which streaming providers can you watch Big School on

Here is the comprehensive list of streaming providers that will show Big School in Australia. If Big School will appear with other providers further down the line, this table will be updated.

The cast of Big School

Big School is a great Comedy movie, we’ve selected several other movie options that we think you would like to stream if you have watched Big School

Big School is a great comedy show, we’ve selected several other show options that we think you would like to stream if you have watched Big School