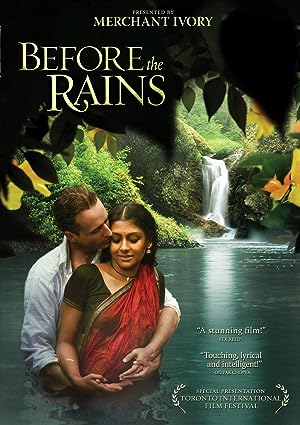 How to Watch Before the Rains 2007 Online in Australia

The cast of Before the Rains

What is Before the Rains about?

Malayalam-speaking T.K. Neelan, Rajat, Manas and his sister, Sajani, live in Kalpetta Township in Kerala, India, during the British Raj. As children they used to play in the woods where Manas and T.K. used to play Bhagwan Shri Ram and Shri Lakshman respectively, and rescue Sita (Sajani) from Lord Ravan's (Rajat) clutches. Now the year is 1937, all are grown up, while Manas is a laborer, Sajani is married to Rajat, and T.K. works for his British employer, Henry Moore, who lives there with his wife, Laura, and their son, Peter. Sajani is also employed as a maidservant in the Moore household. T.K.'s headmaster asks him to join the freedom movement and ask the British to quit India, but T.K. feels that India has made a lot of progress under the British rule and they should continue with this partnership. His headmaster cautions him that partnership is only between equals, but T.K. disregards this, and it is this attitude that will compel him to re-examine his way of thinking when he finds out that Henry is having a steamy affair with Sajani.

Where to watch Before the Rains

Before the Rains Trailer