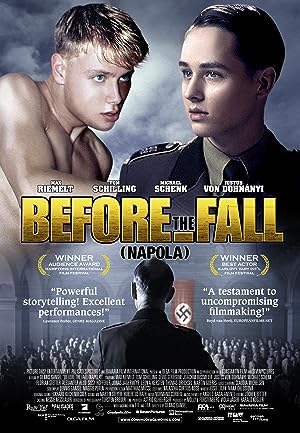 How to Watch Before the Fall 2004 Online in Australia

What is Before the Fall about?

In 1942, Friedrich Weimer's boxing skills get him an appointment to a National Political Academy (NaPolA) - high schools that produce Nazi elite. Over his father's objections, Friedrich enrolls, seeing this as his ticket out of factory life to university and a good salary. During his year in seventh column (fifth form), this innocence is altered as Friedrich encounters hazing, cruelty, death, and the Nazi code. His friendship with Albrecht, the ascetic son of the area's governor, is central to this education; a night in the forest hunting for escaped Russian POWs brings things to a head.

Where to watch Before the Fall

Which streaming providers can you watch Before the Fall on

The cast of Before the Fall

Before the Fall Trailer

Before the Fall is a great Drama movie, we’ve selected several other movie options that we think you would like to stream if you have watched Before the Fall

Before the Fall is a great drama show, we’ve selected several other show options that we think you would like to stream if you have watched Before the Fall

Watch Before the Fall