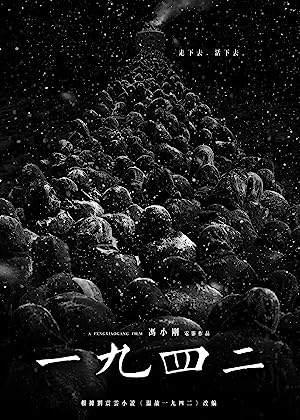 A famine with multiple contributing factors and devastating effects during the Second Sino-Japanese war is chronicled from the official perspective of reporters, generals, politicians and real families whose lives were forever altered by drastic measures they were forced to take in order to survive. Alternately ignoring the dire nature of the famine and its subsequent exodus of millions of people from the Hunen province, and minimizing its devastation to the outside world, the Chinese Nationalist government of the time is one which seems to be over burdened by ongoing war efforts and corruption in the distribution of relief supplies. Policy and private life are worlds apart in stopping the devastation shown through the portrayals of those who lived to tell the tale and their accounts of those who were not so lucky, of whom there were many (3 million.) This is a true story based upon Liu Zhenyun's novel "Remembering 1942," Zhenyun himself is the descendant of a survivor of the 1942 famine and his family story is poignantly portrayed--showing heroism, self sacrifice, terrible misfortune and ultimate survival of the lucky few.