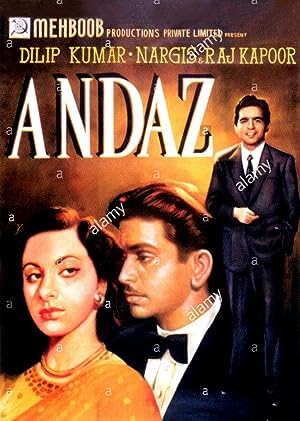 How to Watch Andaz 1949 Online in Australia

The cast of Andaz

What is Andaz about?

Nina is the rich and spoiled daughter of a rich businessman. One day while horse-riding she loses control of her horse and is rescued by a young man named Dilip. Dilip instantly takes a liking to her and starts to frequently visit her house where he entertains her with his singing along with Nina's friend Sheela. Nina's father dislikes this and tries to make Nina realize that spending so much time with Dilip is not wise as Dilip could misunderstand her friendship with him for love. On the day of Sheela's birthday party, Dilip realizes he has fallen in love with Nina and tries to tell her. However tragedy strikes when Nina's father dies of a heart attack that same day and this leaves Nina devastated. Dilip comforts her and tries to reveal his true feelings for her but is shocked by the arrival of Nina's fiancé Rajan who has returned from London. Dilip is shocked that Nina never mentioned that she was already engaged and in love with Rajan. Rajan and Nina eventually get married and Dilip shocks Nina when he finally reveals his true feelings for Nina on the same day of the wedding. Nina is shocked by Dilip's revelation as she only thinks of him as a good friend. This revelation causes strain in Rajan and Nina's marriage as Rajan starts to suspect whether Nina could be having an affair with Dilip and notices that Nina is acting very distant towards Dilip since the day of their wedding.

Where to watch Andaz