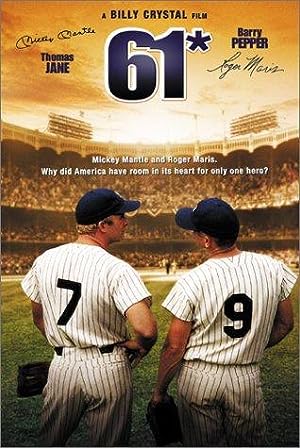 Aiming for one of the most famed records in sports history, a pair of very different baseball players hit home runs at an impressive rate. Roger Maris, a reserved sort, is much less popular than his hard-partying New York Yankee teammate Mickey Mantle, the player who many observers think will be the one to challenge Babe Ruth's record of 60 home runs in one season. But in the summer of 1961, Maris surges ahead of Mantle, making a run at Ruth's mark.

Which streaming providers can you watch 61* on

Here is the comprehensive list of streaming providers that will show 61* in Australia. If 61* will appear with other providers further down the line, this table will be updated.

61* is a great Biography movie, we’ve selected several other movie options that we think you would like to stream if you have watched 61*

61* is a great biography show, we’ve selected several other show options that we think you would like to stream if you have watched 61*