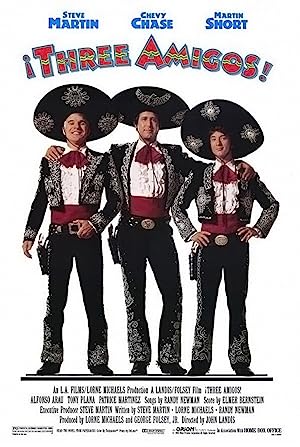 How to Watch Three Amigos! 1986 Online in Australia

What is Three Amigos! about?

Three out of work silent movie actors are accidentally drawn to a Mexican village that is being harassed by a gang of outlaws. The three, 'Ned', 'Lucky Day' and 'Dusty Bottoms' play 'Lone Ranger' types in their movies, but must play their parts for real now.

Where to watch Three Amigos!

Which streaming providers can you watch Three Amigos! on

Here is the comprehensive list of streaming providers that will show Three Amigos! in Australia. If Three Amigos! will appear with other providers further down the line, this table will be updated.

The cast of Three Amigos!

Three Amigos! is a great Comedy movie, we’ve selected several other movie options that we think you would like to stream if you have watched Three Amigos!

Three Amigos! is a great comedy show, we’ve selected several other show options that we think you would like to stream if you have watched Three Amigos!