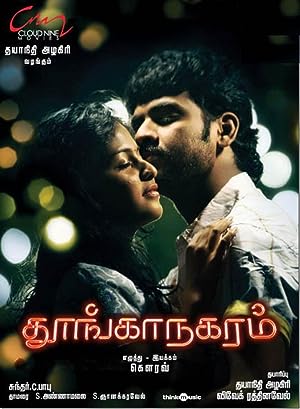 How to Watch Thoonga Nagaram 2011 Online in Australia

What is Thoonga Nagaram about?

A group of four friends (Vimal, Barani, Nishanth and Gaurav) live lives in their own way in Madurai. They are callous youth, who go hammer and tongs to make both ends meet. Vimal, a wedding videographer comes across his childhood friend Anjali, who is a compere in a local cable TV channel and love blossoms. However, one event changes the course of their life. Vimal bashes a youth for taking obscene video clippings of a girl and blackmailing her with ulterior motive. The youth's father (Kamala theatre owner Chidambaram) finds out the men behind the attack on his son. He hatches a conspiracy and ensures that the friends themselves turn foes for each other. In the meantime, it's time for Vimal to tie the knot with Anjali. Did the baddie succeed in his mission is the crux of the story.

Where to watch Thoonga Nagaram

Which streaming providers can you watch Thoonga Nagaram on

The cast of Thoonga Nagaram

Thoonga Nagaram is a great Comedy movie, we’ve selected several other movie options that we think you would like to stream if you have watched Thoonga Nagaram

Thoonga Nagaram is a great comedy show, we’ve selected several other show options that we think you would like to stream if you have watched Thoonga Nagaram