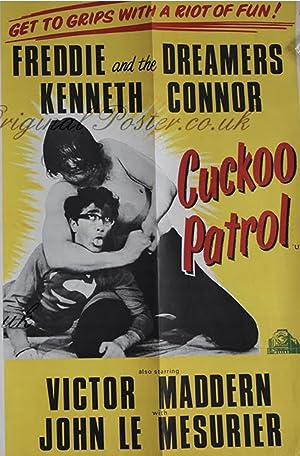 How to Watch The Cuckoo Patrol 1967 Online in Australia

Where to watch The Cuckoo Patrol

What is The Cuckoo Patrol about?

Freddie & The Dreamers star as the Cuckoo Patrol, a group of boy scouts who are eager to do good deeds, but always wind up doing them the wrong way, and frequently get into trouble as a result. Their scout master has tasked the group to take a cart full of camping supplies to a train station. What seems like a relatively easy chore for most scouts turns into an adventure for the Cuckoo Patrol. They soon lose their way and then involve themselves in other escapades, leading the group to filling in for a professional wrestling match, mingling with a bunch of girl scouts whose affairs the girls' scout master greatly disapproves of, and unknowingly helping a couple of robbers with their heist.

Which streaming providers can you watch The Cuckoo Patrol on

The cast of The Cuckoo Patrol