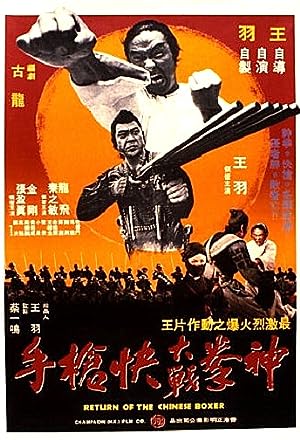 What is Return of the Chinese Boxer about?

In wake of the First Sino-Japanese War (1894-1895), a group of Japanese warlords calculate that the best way to prepare an invasion of the rest of China from their southern Manchuria staging ground. They form an alliance with General Tao, a major power broker in the kingdom, prompting other Chinese generals to rally against him. The chief asset among these patriots is martial arts master named "Rapid Fist" Sau Pai-lung who subsequently thwarts every assassination attempt and other acts of subversion committed by the Japanese forces. Unable to vanquish Sau with battalions of riflemen and ninjas, the invaders enlist the services of several notorious killers, including pole-fighting monk Yin Feng and ruthless gunslinger Black Crane. They attack Sau with an array of exotic weaponry including a double-barrel shotgun that resembles an over-sized fan. At one point, when the Japanese find their backs against the wall, they use magic to bring back three men from the dead, transforming them into unstoppable kung-fu zombies! Of course, master Sau outfights and outwits them all.

Where to watch Return of the Chinese Boxer

The cast of Return of the Chinese Boxer

Return of the Chinese Boxer Trailer

More Action movies like Return of the Chinese Boxer

More action tv shows like Return of the Chinese Boxer

Watch Return of the Chinese Boxer