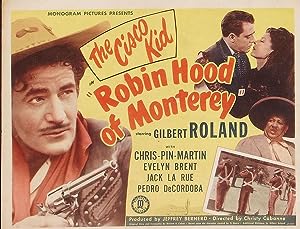 How to Watch Robin Hood of Monterey 1947 Online in Australia

Where to watch Robin Hood of Monterey

What is Robin Hood of Monterey about?

Eduardo Belmonte overhears his new step-mother, Maria, and her lover, Don Ricardo Gonzales plotting to take over the Belmonte rancho on the night of the fiesta given by her husband, Don Carlos Belmonte. Eduardo offers Maria money if she will depart the hacienda premises, but she refuses and then accuses Eduardo of making love to her. The old Don doesn't take kindly to his son hitting on his step-mother and attacks him in a rage. The lights go out, the father is killed and Maria blames Eduardo, who escapes from the house, chased by Ricardo's men. The Cisco Kid and Pancho rescue Eduardo, who has been shot, and hide him while they investigate. Cisco discovers that bullets from Maria's gun, a handy little derringer, are the same type that killed Don Carlos. But the Alcalde arrests Cisco and Pancho, and Cisco is "supposedly" executed by a firing squad, but IS NOT shot and escapes by a trick. And now Maria and Ricardo are in real trouble with Cisco on the loose.

Which streaming providers can you watch Robin Hood of Monterey on

The cast of Robin Hood of Monterey