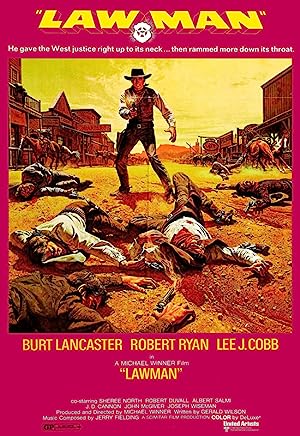 How to Watch Lawman 1971 Online in Australia

The cast of Lawman

What is Lawman about?

While passing through the town of Bannock, a bunch of drunken, trail-weary cattlemen go overboard with their celebrating and accidentally kill an old man with a stray shot. They return home to Sabbath unaware of his death. Bannock lawman Jered Maddox later arrives there to arrest everyone involved on a charge of murder. Sabbath is run by land baron Vince Bronson, a benevolent despot, who, upon hearing of the death, offers restitution for the incident. Maddox, however, will not compromise even though small ranchers like Vern Adams are not in a position to desert their responsibilities for a long and protracted trial. Sabbath's marshal, Cotton Ryan, is an aging lawman whose tough reputation rests on a single incident that occurred years before. Ryan admits to being only a shadow of what he once was and incapable of stopping Maddox. Maddox confides to Ryan that Bannock's judicial system is weak and corrupt, and while he's doubtful that anyone he brings back will suffer more than the price of a bribe, he will not be deterred from the unrelenting pursuit of his duty. Initially Bronson appears willing to make concessions, but when his oldest friend Harvey Stenbaugh is killed after deliberately picking a fight with Maddox, Bronson digs in his heels with the rest of the town to resist the relentless lawman.

Where to watch Lawman