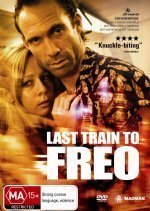 How to Watch Last Train to Freo 2006 Online in Australia

The cast of Last Train to Freo

What is Last Train to Freo about?

Two thugs from the Perth suburb of Midland catch the last train to Fremantle. When a young woman boards the train a few stops later, they begin talking and find out not everyone on the train is who they seem to be.

Where to watch Last Train to Freo