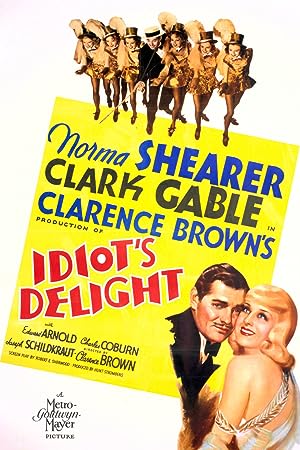 How to Watch Idiot's Delight 1939 Online in Australia

The cast of Idiot's Delight

What is Idiot's Delight about?

When song-and-dance man Harry Van returns from World War I, he finds work hard to come by. His greatest success comes as straight man in a phony vaudeville mind-reading act with the tipsy Madame Zulieka. While on tour in Omaha he meets acrobat Irene Fellara, and they have a brief romance. Twenty years later while Harry is on tour in Europe with a troupe of leggy blonde dancers, his train is stopped at the Swiss border and he finds himself stranded in the Alps in anticipation of World War II hostilities. Harry and his chorines take refuge in an Alpine hotel with a group of disparate travelers who are also marooned there. Among them are an American pacifist, British newlyweds, a cancer researcher, a German munitions manufacturer, and a beautiful blonde expatriate Russian aristocrat who looks suspiciously like the Irene of two decades earlier.

Where to watch Idiot's Delight