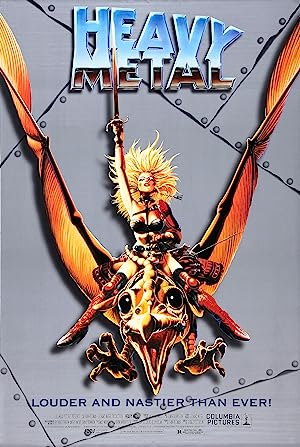 How to Watch Heavy Metal 1981 Online in Australia

The cast of Heavy Metal

What is Heavy Metal about?

An astronaut brings home a glowing green orb for his daughter. However, the green orb wipes him out and corners the girl for its purposes. Claiming to embody ultimate evil, the malevolent sphere, known as the Loc-Nar, terrorizes the little girl by showing a series of bizarre and fantastic stories it has influenced. The first is "Harry Canyon", a cynical taxi driver in a squalid futuristic New York who finds himself involved with a damsel in distress who is relentlessly pursued by murderous thugs who desire the Loc-Nar her archaeologist father found. The second is "Den", which chronicles the adventures of a nerdish teenager who is thrown into the fantasy world of Neverwhere, where he is transformed into a studly naked muscle man, desired by beautiful women, who must get involved in a conflict revolving around possession of the Loc-Nar. The third is "Captain Sternn", where the title character is a handsome but irredeemable scoundrel who stands accused in a trial that Loc-Nar throws into chaos. The fourth is "B-17", where a World War II bomber plane limps home after a bombing run, only to have the Loc-Nar ram into it and revive the dead crew members as murderous zombies. The next is "So Beautiful, So Dangerous", where a buxom secretary at the Pentagon is abducted by stoned alien wastrels and an oversexed robot. The final story is "Taarna", where the Loc-Nar has to come to a future Earth and changes a peaceful people into a horde of murderous barbarians who rampage with genocidal zeal. Only the last Tarrakian, a silent swords-woman known as Taarna, can avenge the victims and stop the Loc-Nar.

Where to watch Heavy Metal