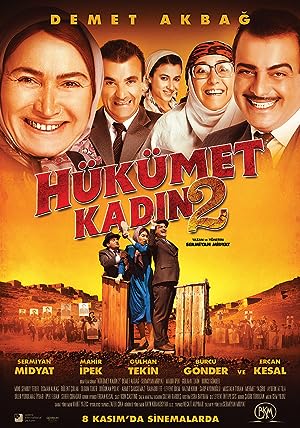 How to Watch Hükümet Kadin 2 2013 Online in Australia

What is Hükümet Kadin 2 about?

Hukumet Kadin 2 is the second installment of the series. The second film goes back to the year 1949 and follows the journey of the main character Xate and her sons and daughter as she campaigns on behalf of her recently jailed husband. Xate's nemesis Faruk rallies against her, trying to win the elections himself. Xate works hard both to win the elections and to make sure her village gets to have a brand new school. Just like in the first film, the entire shooting took place in Midyat.

Where to watch Hükümet Kadin 2

Which streaming providers can you watch Hükümet Kadin 2 on

The cast of Hükümet Kadin 2

Hükümet Kadin 2 is a great Comedy movie, we’ve selected several other movie options that we think you would like to stream if you have watched Hükümet Kadin 2

Hükümet Kadin 2 is a great comedy show, we’ve selected several other show options that we think you would like to stream if you have watched Hükümet Kadin 2