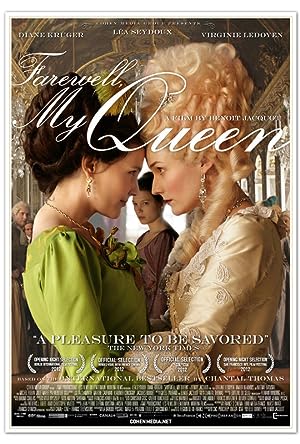 How to Watch Farewell, My Queen 2012 Online in Australia

The cast of Farewell, My Queen

What is Farewell, My Queen about?

In July 1789, the French Revolution is rumbling. Far from the turmoil, at the Château de Versailles, King Louis XVI, Queen Marie-Antoinette and their courtiers keep on living their usual carefree lives. But when the news of the storming of the Bastille reaches them, panic sets in and most of the aristocrats and their servants desert the sinking ship, leaving the Royal Family practically alone. Which is not the case of Sidonie Laborde, the Queen's reader, a young woman, entirely devoted to her mistress; she will not give her up under any circumstances. What Sidonie does not know yet is that these are the last three days she will spend in the company of her beloved Queen...

Where to watch Farewell, My Queen