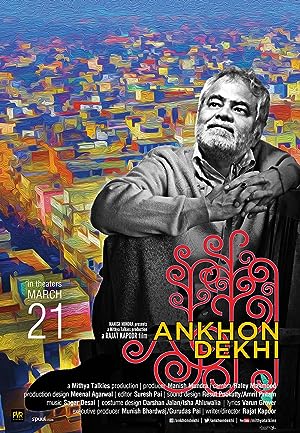 How to Watch Ankhon Dekhi 2013 Online in Australia

What is Ankhon Dekhi about?

Raje Bauji (Sanjay Mishra) is a man in his late fifties, living out a dreary but eventful life in a small house in old Delhi- where he lives with his extended family. A random incident is going to change his life in a dramatic way- though he does not realize at the moment. Bauji's daughter has been seeing a boy of ill repute. When that fact is revealed to the family, after much deliberation they decide to do the obvious- lock up the girl and go beat the willful boy. It is a funny old journey of this man, this old fool- who is both Lear and the fool.

Where to watch Ankhon Dekhi

Which streaming providers can you watch Ankhon Dekhi on

Here is the comprehensive list of streaming providers that will show Ankhon Dekhi in Australia. If Ankhon Dekhi will appear with other providers further down the line, this table will be updated.

The cast of Ankhon Dekhi

Ankhon Dekhi is a great Comedy movie, we’ve selected several other movie options that we think you would like to stream if you have watched Ankhon Dekhi

Ankhon Dekhi is a great comedy show, we’ve selected several other show options that we think you would like to stream if you have watched Ankhon Dekhi